I have started back to classes last week after taking last semester off to work on my mental health and generally just get my shit together. And for the most part, I am much better than I was at the beginning of the Spring semester that I dropped out of (I cringe just typing that, it sounds like such a failure to me still). I am still having moments of struggle though. And this is frustrating to me. Maybe I am being to hard on myself, as my mother likes to point out to me. Even so, I set high standards for myself and I just don’t feel like I am living up to them.

Now, I know that I am still suffering from the disease of depression, and that there isn’t a magic switch that just shuts it off (medicine). But I was still hoping that once I started to feel better, that it would last longer. That I wouldn’t have a panic attack trying to pack my backpack for the day just because I couldn’t find the right notebook for class. I was hoping that I wouldn’t want to sleep for hours after getting back from a full day of class. I’m tired of the tight feeling of anxiety, I am sick of being tired and feeling guilty. I feel like I am not living up to my full potential, which just kills me.

At the risk of sounding less than humble, I will say that I am a very intelligent person. Before all this happened I was getting a 4.0 in every class, without much effort. And now, I feel like half that person, the way I think is different. The way that my mind works just feels fuzzy still. And that might be the medications, but it might be that I have been permanently changed by this strange beast called Depression.

I hope that all the changes, well the bad ones at least, I hope that they are not permanent. My greatest hope is that I can return to my “normal” self, maybe just stronger for coming through all this.

Until then, I am trying to just walk the walk. I am doing my best to go about my daily life as if nothing is wrong. To not let the panic, anxiety, and exhaustion dictate my days. If you met me today in person, I know that you would not suspect that I had depression/anxiety. I have not decided if that is a good thing or a bad thing as of yet, but it is the only way that I am coping. Putting on a brave face and muscling through the day with a smile. Even if I have to fake that smile. What’s that saying, Fake it til you make it?

Well, I’m working on it. Depression sucks. Anxiety sucks. I just want my whole self back, but I am coming to the scary realization that this may never happen. This thing is big, and may have changed me forever.

Sometimes I am just so scared.

Sometimes I just want to fast-forward and be done with this, to see if I come through it OK.

So this weekend I was fortunate enough to be able to overcome one of my biggest fears. I have always been afraid of airplanes, flying, and just heights in general. But with everything that has happened in my life recently I have decided to not waste anymore time being afraid to live! So what did I do this weekend?

I flew in a HELICOPTER!

That’s right. And not just any helicopter. Oh no, the one I flew in was downright dinky. Like smaller than my car!

Our ride, an R44 helicopter

Let me tell you, I was terrified at first. I put on a brave face though because I was with my boyfriend (who I’ll call D for the blogs purposes). Well, D is taking lessons to become a helicopter pilot, so he obviously loves to fly. And he has a wonderful instructor who is very good at what he does!

Anyways, we pulled up to the hangar where they keep the helicopters and they got me all strapped in. Let me tell ya folks, I was hanging on for dear life. I was so distracted trying not to pass out that I don’t remember much of the beginning of the flight. But eventually, and with many hand-squeezes and encouraging smiles from D (bless him), I calmed down and started to enjoy myself.

Do I look nervous? 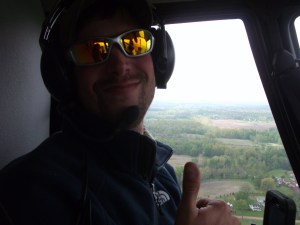 Dare I say I have become a lover of flying?! It was so much fun, I felt like I was riding high all day, even after we landed. I owe D a lot for talking me through it and to his instructor for making it a very smooth ride and for helping me feel comfortable.

Moral of the story, do your best to face your fears because it might turn out to be not so bad as you thought. And if you are as lucky as me, you could have the time of your life!

I cannot wait to fly again, I am hoping to ride along with D next time he takes a lesson.

In the meantime, I am settling for looking at the pictures I took while we were in the air. So I hope you enjoy them as well. Michigan really is breathtaking. 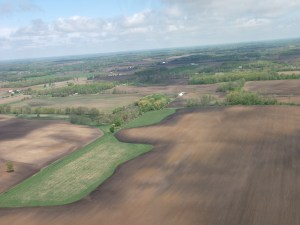 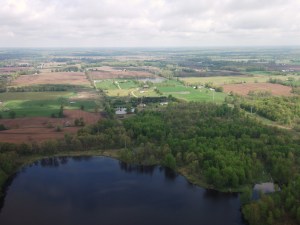 Thanks for stopping by! Hope everyone is having a great day/night!